On Wednesday, February 28th Rep. Ann Williams, D-Chicago, voted to pass a number of gun control measures in the Illinois House. Included in these measures were HB 1467, which bans the sale of bump stocks and trigger cranks, HB 1468 , which creates a 72-hour mandatory waiting period after the purchase of an assault weapon, and HB 1465, which bans the sale of assault weapons to individuals under the age of 21. Ann Williams was proud to support all of these proposals, as she sees gun control measures as the first step towards addressing the issue of gun violence.

Another landmark piece of gun control legislation passed the House with a 64-52 vote and is currently on its way to Governor Rauner’s desk to be signed into law. SB 1657 passed the Senate last year and after the hard work of many advocates, organizers and legislators, it passed the House on Wednesday. SB 1657 creates the Gun Dealer Licensing Act, which would make it unlawful to sell guns without a license from the Department of Financial and Professional Regulation. This legislation is essential to ensure that gun dealers are properly licensed and regulated within the state of Illinois. Ann has been working with various organizations, such as the Illinois Council Against Handgun Violence, to ensure the passage of this legislation.

To help urge Governor Rauner to sign the Gun Dealer Licensing Act,  join the Illinois Gun Violence Prevention Coalition and the Illinois Council against Handgun Violence by singing onto their petitions for the Governor to sign the Act into law. You can also follow Ann’s Facebook or Twitter to receive updates on different events happening around the city that focus on calling for increased gun control and regulation in response to our countries epidemic of gun violence. 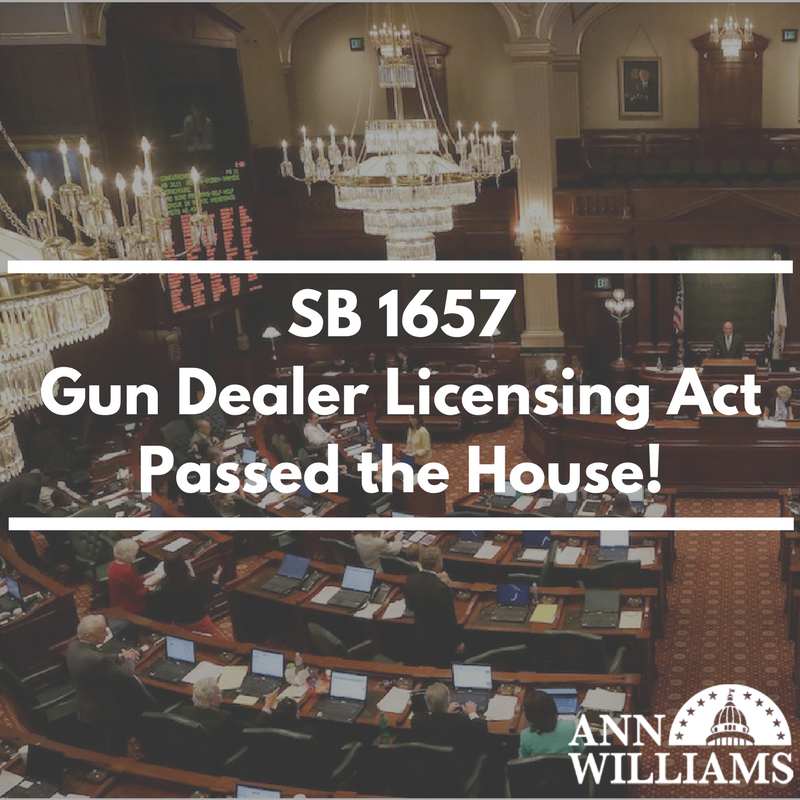 0
0
Scenes from the Community Climate Celebration, where we came together to recognize and acknowledge all...

Scenes from the Community Climate Celebration

October 14, 2021
Posted by: Ann Williams
0
0
Today, I was honored to participate in the bill signing of the long-awaited clean energy...

August 1, 2021
Posted by: Ann Williams
0
0
On July 27th, Illinois legislators, advocates and guests met with Governor JB Pritzker at the...

June 8, 2020
Posted by: Ann Williams
0
0
I was honored to be on Sunday Spin with Rick Pearson yesterday.  Please click this...

March 13, 2020
Posted by: Emily Melbye
0
0
Yesterday, I was honored to appear on Joan Esposito: Live, Local, and Progressive on WCPT...

March 11, 2020
Posted by: Emily Melbye
0
0
Dear Friends and Neighbors: Happy New Year! I hope your holiday season was warm and...

August 9, 2019
Posted by: Lauryn Schmelzer
0
0
Last summer, motivated by a difficult news climate and the desire to take concrete action,...

June 11, 2019
Posted by: Emily Melbye
0
0
Last week, Representative Williams sat down with Tom Moss of the Indivisible Chicago Podcast to...